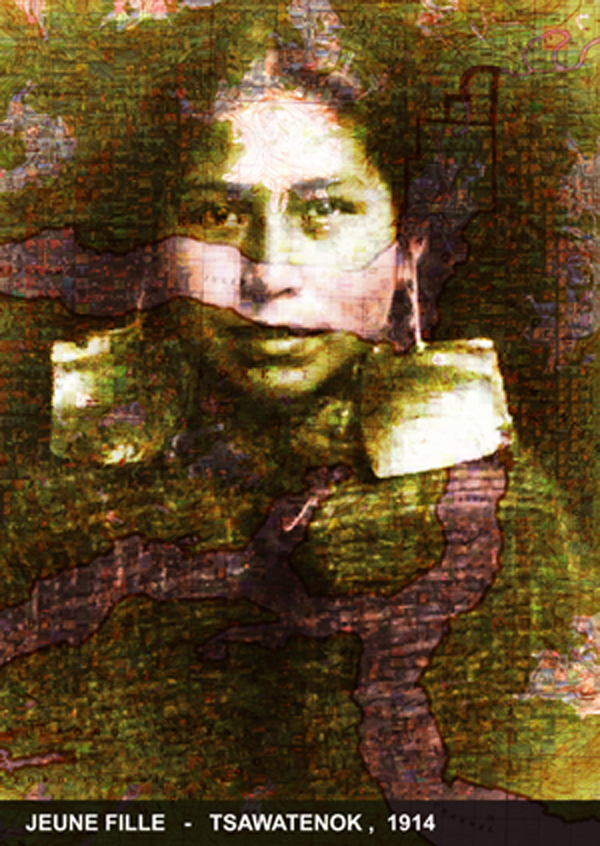 The Crossing / Ashu-takusseu explores the question of the representation of the subject through a photographic medium. It engages Aboriginal communities of the Americas and in particular of northeastern Quebec, communities with whom I have been in personal contact for over twenty-five years. Aboriginal people have recently occupied public spaces through social media. They are invited to send me their digital self-portrait.

These photographs will be recomposed in a mosaic by drawing on the thousands of images produced by the Wapikoni Mobile project, which is created in Quebec and directed by the renown cinematographer Manon Barbeau and initiates youth to the world of video production by inviting them to direct videos about their community. This project creates a dialogue with the photographer Edward Curtis, who at the beginning of the twentieth century roamed the Americas so as to document Indigenous culture. Several of Curtis’ photographs are an integral part of the project.

In this way, this project similarly echoes Curtis’ work method, which begs the question of the photographer’s goals and objectives and what the photographer considers worthy of retention through the lens of iconography. Aboriginal people have especially been viewed as the Occidental man wished to remember them. The documentary nature underlying portraiture and self-portraiture is here questioned through a new landscape medium explored by the artist and its cultural implication on the history of representation. 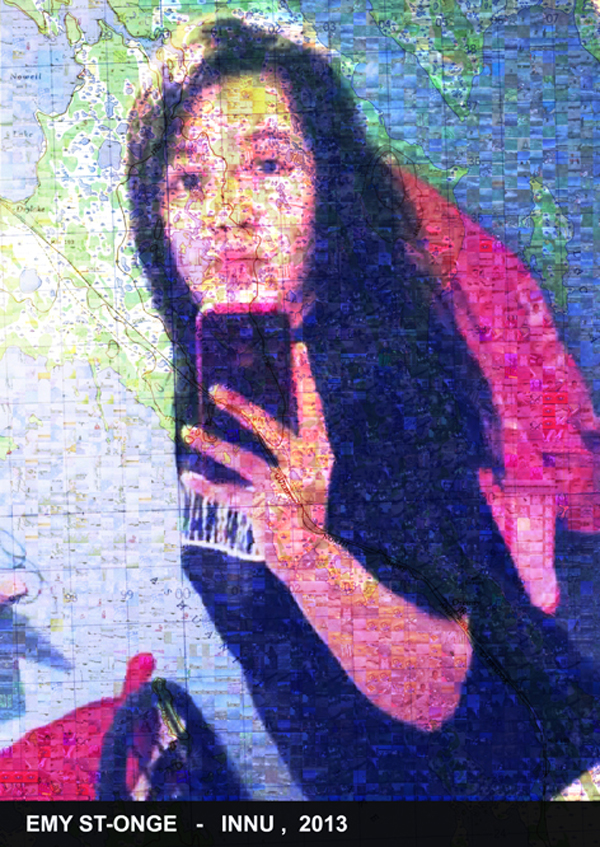 Michel Depatie has been frequenting the Innu from the community of Uashat mak Mani-Utenam for twenty-five years. This project is a tribute to Aboriginal culture and the artist’s Innu friends. The Crossing also aims to underline the recognition of the presence of First Nations in the American landscape as a way to expose the reality of First Nations today.

Michel Depatie has had an artistic practice for more than twenty years. His work is primarily focused on photography, video, and installation, and has been exhibited again and again in Quebec as well as internationally. For some years now, Michel Depatie has been interrogating photography as a simply iconographic work likely to lose all traces of reality, and therefore, of ourselves. The artist poses a reflection on our practices relating to perception and the different relationships the audience has with the image. In particular, Michel Depatie explores the different mediums of photography. He has produced several works of which, among others, works printed on glass through a process that is unique to Quebec. His works have first of all been the subject of a “deconstructive” research of the image by the use, among other mediums, of photographs taken of videos projected onto the forest. The effect of various stages of production allows Michel Depatie’s photography to often resemble that of painting.

An important part of his series of works has been inspired by Aboriginal culture and by the territory occupied by the Innu of the North Eastern lands of Quebec: Nitassinan. He has created, over the years, many in situ installations in nature. His most recognized work of which was The Meeting – Natishkatun produced at the international symposium of the Derouin Foundation in 2007, and inspired by the traditional sweat lodge. His relationship to the Innu community of Maliotenam began in 1990. For 23 years now, he has been visiting this community several times a year and regularly participates in contemporary practices of fishing and hunting. Unlike Curtis who, for nearly 25 years frequented Native American communities to shoot thousands of “ethnological” photographs, Michel Depatie has produced very few photographs over this long time span. The artist has, in a deliberate manner, refused to impose a photographic eye on his experience and his observations during his time there. His desire to approach Aboriginal people through photography by the medium of self-portraiture is in harmony with his experience of meeting the Other.